Tiananmen Square or Tian’anmen Square (天安门 Pinyin: Tiān’ānmén) is a city square in the centre of Beijing, China, named after the Tiananmen (‘Gate of Heavenly Peace’) located to its north, separating it from the Forbidden City. The Tiananmen (“Gate of Heavenly Peace”) is a gate in the wall of the Imperial City, was built in 1415 during the Ming dynasty. The square contains the Monument to the People’s Heroes, the Great Hall of the People, the National Museum of China, and the Mausoleum of Mao Zedong. Mao Zedong proclaimed the founding of the People’s Republic of China in the square on October 1, 1949 – the anniversary of this event is still observed there.Tiananmen Square is within the top ten largest city squares in the world (440,500 m2 – 880×500 m or 109 acres – 960×550 yd)

WHAT IS THE TIAN´AN MEN ?

WHAT ARE THE PLACARDS ON THE TIAN´AN MEN ?

Monument to the People’s Heroes

Monument in front of Mao’s Mausoleum on Tiananmen Square 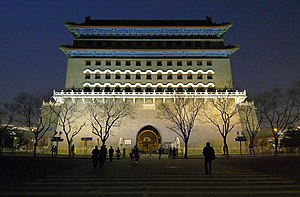 Performance at the Drum Tower

THE CAPITAL OF THE PEOPLE´S REPUBLIC OF CHINA (PRC)

LINKS TO HISTORIC SITES IN & AROUND BEIJING

THE GREAT WALL OF CHINA>LONGEST STRUCTURE

BEIJING DAXING INTERNATIONAL AIRPORT : THE BIGGEST AIRPORT IN THE WORLD

Sun May 31 , 2020
The Taj Mahal (Literally : ´´Crown of the Palace´´) is an ivory-white marble mausoleum on the south bank of the Yamuna river in the Indian city of Agra. It was commissioned in 1632 by the Mughal emperor Shah Jahan (reigned from 1628 to 1658) to house the tomb of his favourite […]