The gondola is a traditional, flat-bottomed Venetian rowing boat, well suited to the conditions of the Venetian lagoon. It is similar to a canoe. It is propelled by a gondolier, who uses a rowing oar, which is not fastened to the hull, in a sculling manner and acts as the rudder. For centuries, the gondola was a major means of transportation and the most common watercraft within Venice

Describe the history and usage of Gondola

How is a Gondola propelled ?

Decsribe the changes in Gondola in 20th Century 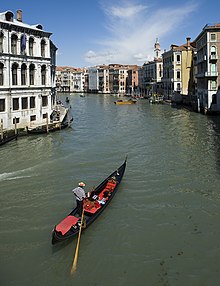 A gondola on the Grand Canal

Describe the current design & make of a Gondola

Describe the details & symbolisms of a Gondola 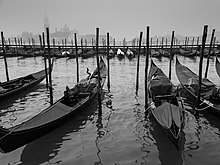 Gondolas at their moorings

Describe the process of Gondolier

On the Grand Canal

Are Gondoliers only male ?

Are there Gondolas outside of Venice ? 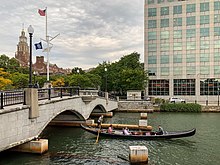 Gondola on the Providence River

Sun Oct 20 , 2019
Venice (Italian : Venezia, Venetian : Venesia or Venexia) is a city in northeastern Italy and the capital of the Veneto region. It is situated on a group of 118 small islands that are separated by canals and linked by over 400 bridges.The islands are located in the shallow Venetian Lagoon, an enclosed bay that lies between the mouths of the Po and the Piave rivers […]