A Wat is a Buddhist Temple in Thailand. Wat Phra Kaew (Thai : วัดพระแก้ว) commonly known in English as the Temple of the Emerald Buddha and officially as Wat Phra Si Rattana Satsadaram is regarded as the most sacred Buddhist temple (wat) in Thailand. The Emerald Buddha housed in the temple is a potent religio-political symbol and the palladium (protective image) of Thailand.The temple is in Phra Nakhon District, the historic centre of Bangkok, within the precincts of the Grand Palace

What is Wat Phra Kaew ?

What is the brief history behind Wat Phra Kaew ?

Describe the rules of entry and conduct @ Wat Phra Kaew 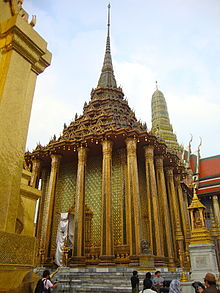 Mon Nov 18 , 2019
Wat Arun Ratchawararam Ratchawaramahawihan (Thai: วัดอรุณราชวราราม ราชวรมหาวิหาร “Temple of Dawn”) is a Buddhist temple (wat) in Bangkok Yai district of Bangkok, Thailand, on the Thonburi west bank of the Chao Phraya River. The temple derives its name from the Hindu god Aruna often personified as the radiations of the rising sun. Wat Arun is among the best known of Thailand’s landmark. The first light of […]